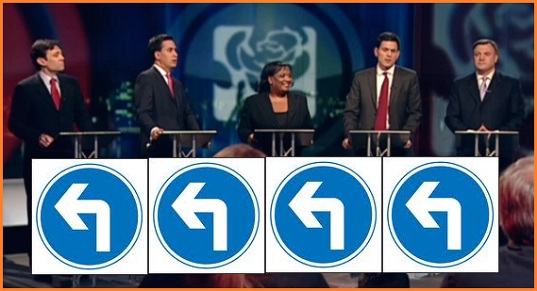 Could there be dangers in ceding the centre ground?

The Evening Standard political writer, Paul Waugh, has made an astute observation about the Labour leadership race – it is taking the party leftwards.

He noted: “…..David Miliband came up with a string of policies that will gladden the hearts of party activists and trade unions. Axeing Â£100million tax breaks for private schools was an easy hit and one that – surely completely unintentionally – drew attention to Diane Abbott’s praise for City of London school this week. But perhaps more important were Mili-D’s new call for a “mansion tax” on Â£2m homes and an ‘extension’ of the banker bonus tax….

… at some point the new Labour leader, whoever they are, will have to tell the party things it doesn’t want to hear. Mili-D’s best line on Newsnight was that Labour shouldn’t fall into the “false debate” that how much a Government spends is somehow a mark of success, rather than what it spends that money on…”

There are still fourteen weeks of this campaign to go – plenty of time for a “who is the most leftist” bidding war to develop as all five try to appeal to the three separate electorates.

The problem is that what goes down well within the Labour movement might not be the most appealing proposition for the electorate at large – and you can bet that campaigners for both coalition parties are monitoring every word for ammunition that can be used in the future.

Faced with similar pressures, but about the right, during the 2005 Tory contest, Cameron made his commitment on the grouping his party should join in Brussels – a promise that continues to cause problems.

The centre ground is where British elections are won and lost. That was Blair’s great genius in 1997 and that, whether all factions within the Tory party like it or not, is where the fact of the coalition is steering Cameron’s government.

Even though the four men in the race were only children at the time they are all, surely, acutely aware of what Michael Foot’s leadership did to Labour in the years after the party lost power in 1979.