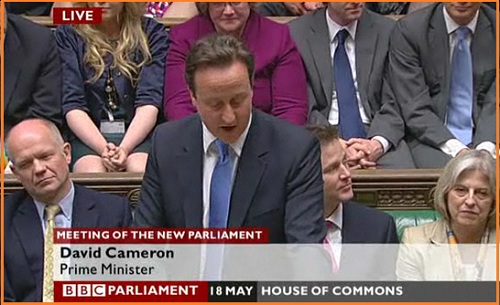 Will he be following “The Fink’s” advice?

There’s been an intriguing comment from the PM’s spokesman about PMQs – the first of which to David Cameron takes place at the unusual time, for this week only, of 3pm. It was strongly hinted that there will be changes but “wait until this afternoon, don’t want to spoil the fun.”

I wonder whether Daniel Finkelstein of the Times was on the right track this morning in his “advice” to the new PM and the notion of collective responsibility in a coalition government.

He wrote: “... Is it really likely that Chris Huhne and Liam Fox now â€” suddenly â€” agree on everything? Then why should they be required publicly to pretend that they do? And how can either of them be authentic and speak directly to the public while engaged in such a pretence.

The creation of the coalition is, therefore, a significant challenge to the conventions that go with collective responsibility. Which also makes it a very big opportunity.

Today David Cameron faces his first session of PMQs as Prime Minister. He can â€” if he wants â€” make it a very big moment for politics and for himself. He should refuse to pretend that every member of his Government agrees about everything. He should be grown up about the nature of coalition and the origin of compromises. He must insist that his Government stands and falls together, but it should not do so on a pretence.”

Certainly this seems a smart idea because, no doubt, all the opposition questioners will seek to find splits in the coalition.

The Fink used to work alongside George Osborne at CCHQ and they are very close. When he writes something like this of government plans I tend to believe it.