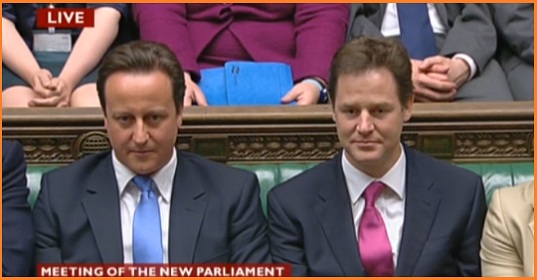 We have spent very little time looking at the voting intention polls (VI) since the May 6th general election. The next encounter seems to far off that it hardly seems worthwhile.

Maybe this is a mistake. For a marked trend in the VI surveys that there’ve been following the election is that Labour has been polling quite a bit above its 29.7% general election share. The latest from ComRes overnight had with changes on the election CON 37%(nc): LAB 33%(+3): LD 21%(-3).

This is in contrast to what happened to the Tories following their 1997 defeat. The first post-election ICM poll had CON 23: LAB 60: LD 12.

For those addicted to checking out what current polling means in terms of seats UKPR’s latest UNS prediction is for the Tories to be 26 short of an overall majority – seven seats below where they are at the moment.

But isn’t this the “glue” that will keep the coalition together? For the time, surely, when the CON-LD deal will be most vulnerable will be when the polling suggests that the blues could secure a working majority on their own.

Then it will be so much harder for Cameron to keep his party onside. Why should his right-wingers acquiesce on issues that they are so opposed to when a coalition break-up could lead to an early election and a Tory majority government?