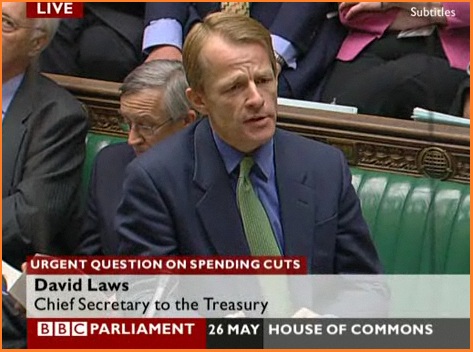 But will Dave and Nick try to tough it out?

One betting market where you can bet on the future of David Laws is the PoliticalSmarkets one on Who will be the first cabinet member to leave?

There has been a bit of movement overnight but currently you can get a price of 17% that Laws will be first to go. Speculation about what might happen to the Treasury Secretary has yet to put him into the favourite slot – currently held by Vince Cable at 22.22%.

The critical thing is how the coalition duo, Dave and Nick, deal with it. Will they try to tough it out saying that nothing should happen until the Parliamentary Commissioner has reported or will they take early action? Past experience suggests that Dave sticks with his team.

We saw that in the approach to last year’s expenses cases when it was alleged that those closest to the leader were being treated more favourably than those Tory MPs who weren’t.

Even better examples are how he stuck with George Osborne in late 2008 when the “Yacht-gate” crisis blew up and, of course, last year’s attacks on PR boss, Andy Coulson, over the investigation on telephone tapping during his time as editor of the News of the World.

Notice as well that former Tory chairman, Caroline Spelman, is there round the cabinet table even though she had a lot of questions to answer eighteen months ago over early expenses allegations.

My guess is that Clegg will be loyal to his party colleague but that Cameron will make the final decision.