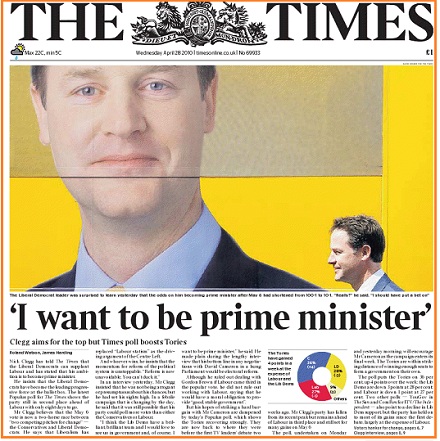 Is this going to be Clegg’s final week pitch?

I’ve long taken the view that the most critical four and a half minutes in this election campaign will be the three 90 second wind-up statements by Brown, Cameron and Clegg at the end of tomorrow night’s debate.

Each one will use it as a straight appeal setting out the core reasons why voters should support them and their parties. What they say will frame the final days of campaigning.

So what are we to make of the interview with Nick Clegg in this morning’s Times when he sets out his ambition to become Prime Minister – something I don’t think he has expressed in this form before?

My reading is that this is part of a deliberate strategy to move on from the hung parliament narrative in this increasingly presidential-type campaign. Clegg still has novelty value and this builds on it.

He can only make this pitch with any credibility because of the progress that his party has seen in the polls.

He’s helped by ongoing negative perceptions of Mr. Brown and what for me has been a surprisingly lacklustre and disjointed Tory campaign. Voters want change but do enough of them want Mr. Cameron?

Whatever I think the move will help the yellows to win more seats in an election where the air campaign has been so much more important than what’s been taking place on the ground.

The SportingIndex spread on the Lib Dems has continued to move upwards and is now 89-92 seats.