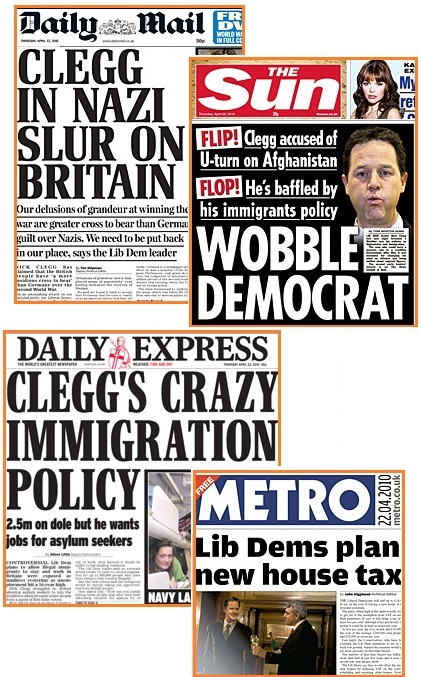 Will this reverse the polling surge?

One of the ongoing moans of the Liberal Democrats was the challenge they face in getting the attention of the media.

Well they can’t complain this morning. For now the attention is moving off the volcanic dust story Nick Clegg faces the full force of the tabloids with one paper after another firing salvo after salvo at him and his party.

The question is whether it’s going to have an impact? Are the papers as powerful as they were?

For the central dynamic of this election is that voters are totally disenchanted with Mr. Brown and increasingly have become less convinced by Mr. Cameron. Stepping into the void has come Mr. Clegg.

He’s been helped by pretty poor campaigns by both Labour and the Conservatives juxtaposed with the novelty of him being unknown making it easier for Clegg to present himself as the agent of change.

Today’s coverage will have an impact only if it chimes with the groups of voters who the polls say have moved to the yellows.

Clegg got his first big platform last week and became an overnight sensation. How’s he going to look tonight following this tabloid mauling?