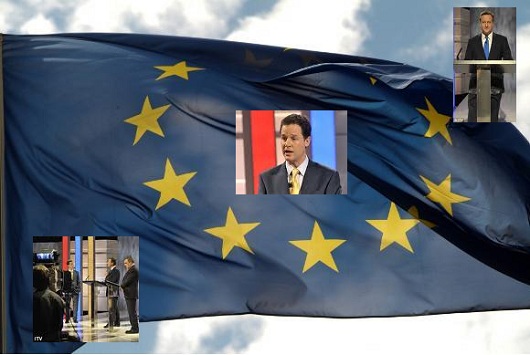 Could this be a trap for the Tory leader?

As we get closer to each of the debates all three participants have been positioning themselves on issues that might come up.

Thanks to David Blackburn on the Speccie CoffeeHouse blog for highlighting this one – Nick Clegg’s offer yesterday to hold a full “in or out” referendum on Britain’s membership of the EU.

This, of course, has been one of the key demands of UKIP – and could supporters of that party get closer to reaching their objective by voting Lib Dem?

Blackburn explains it like this: “Iâ€™d expected the papers to be full of Nick Cleggâ€™s offer of an â€˜In/Outâ€™ EU referendum, should the EU draw up a treaty that would further alter the British constitution. He made the pledge on radio yesterday; he insisted that he would campaign to remain in the EU, but the people should decide. The papers are silent as yet, but I expect Clegg to have another crack this evening.

For all his wide-eyed innocence, Cleggâ€™s a cunning knave. Scenting dissent if not panic among conservatives, Clegg offers eurosceptics 30 pieces of silver.”

Cameron will find it difficult raising the LD’s manifesto commitment on a referendum because of his own actions in blocking one on Lisbon.