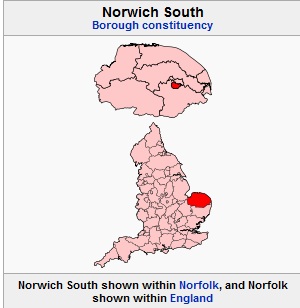 There’s a new poll out from Ipsos-MORI on Norwich South where ex-home secretary and fierce Brown critic, Charles Clarke, is facing a tough fight with the Tories, LDs and the Greens.

The voting intention question listed all the candidates names as well as their parties and like with all Ipsos-MORI poll the sample was not past voted weighted.

I think Anthony Wells is right to highlight that a CON-LAB swing in a specifics seat when all the national polls are in the opposite direction looks strange.