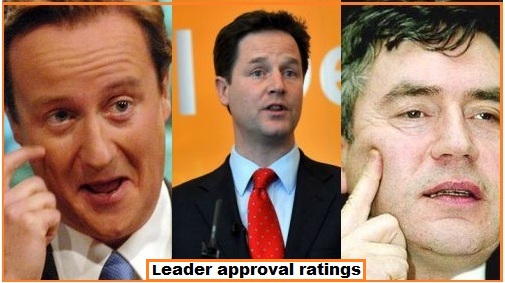 Are the Tories right to make Brown the issue?

This is the second of my planned weekly threads on what many pundits believe are the best guide to forecasting general elections – the leader approval ratings. The comparisons above are the net change as compared with last week.

These are the responses to questions that are asked in a consistent standard form and the latest are to be found in the detail from the YouGov poll for the Sunday Times.

As can be seen all three saw a rise in their “badly” total but Cameron, perhaps because of Ashcroft, has taken the biggest hit. His numbers are at their lowest level since October 2007 just after Brown’s general election U-turn.

But Brown continues to trail a long way behind and if the theory about approval ratings is correct it’s hard to see him saving the day unless there is a sharp narrowing of the gap.

This is reinforced by another question in the poll in which 51% said they would be “dismayed” when asked “How would you feel about Gordon Brown remaining Prime Minister after the election?”. This compares with just 11% saying they would be “delighted” and 29% said they “wouldn’t mind”.

This question was introduced by YouGov with the phrase “David Cameron spoke recently of “the incredible dark depression of another five years of Gordon Brown” which, to my mind at least, probably made the outcome worse for the PM.

As someone who has apparently been identified as a possible swing voter by both the Tories and Labour in the key marginal of Bedford I’m getting special solicitations from the two main parties. The Labour spiel was to ask me to “unite behind” the incumbent MP to “stop the Tories“.

The latest Tory move, a personal letter from Dave, makes the point that this is “one of the seats we have to win is the one you live in” and that unless the Conservatives succeed locally “we will not be able to change the government at Westminster – and that means five more years of Gordon Brown…”

So fear of the Tories is being set against fear of Brown. It’s negative on both sides and no doubt that will be magnified as we get closer to the date.