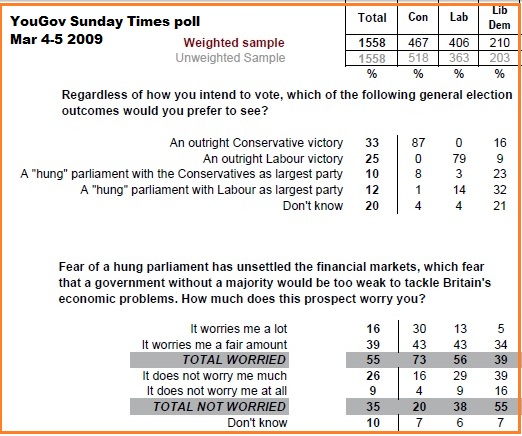 What do these say about hung parliaments and the LDs?

Reproduced above are a couple of findings from today’s Sunday Times YouGov poll which I think might have signficance.

The first is a form of forced choice question where the responses are Lib Dem supporters are the most interesting. Just comparing their answers then support for Labour is just ahead of the Tories – even though more of the would prefer a Tory outright win than a Labour one.

The second question could add fuel to what we’ve been calling the “hung parliament paradox” – the more such an outcome seems likely the less the chances of it happening.

Although I think that the question is a bit leading the 55-35 WORRIED:NOT WORRIED split suggests that this could be exploited in the campaign’s closing stages.

On top of this YouGov found that one in five voters would consider voting for their second choice party if they felt it would avoid a hung parliament.

There’s clearly a lot of work to do by the hung parliament protagonists.