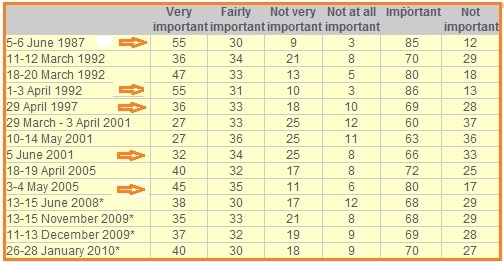 What does this say about potential turnout?

Two of the great things about Ipsos-MORI is that it has been political polling in the UK for longer than any other firm with a website that has a mine of information going back decades. Another good thing is that the firm’s non-voting intention questions are generally very well drawn up and they use the same form time and time again.

Take this table reproduced above with responses over nearly a quarter of a century to the question – “How important is it to you personally who wins the General Election?”

I’ve highlighted the pre-election polls and, as can be seen, the level of importance increases as we get closer to the date. And notice, too, how the latest figure from January 2010 is already ahead of 1997.

The Blair-Hague battle in 2001 is hardly surprising but it’s the apparent lack of interest in Tony Blair’s landslide victory four years earlier that I find most surprising.