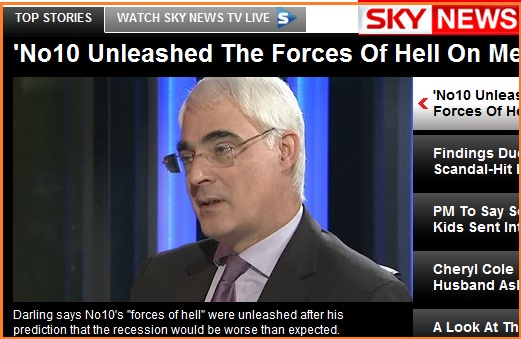 Is this a cert for PMQs today?

They are back at Westminster this week and at noon we’ll see one of the few remaining PMQs before the campaign starts.

With the bullying allegations and the style of the Brown Central operation being the theme of the week the Darling comments in a Sky interview last night look like keeping the pot boiling.

For the Chancellor told Jeff Randall that Downing Street’s “forces of hell” were unleashed on him after his pessimistic September 2008 prediction on the scale of the recession.

That’s a striking phrase which looks worse in print than it actually sounded when he spoke it. It should be said as well that the chancellor denied that he had been bullied.

But for such a senior cabinet member to be going public in this way so near to the election is incredible. Perhaps it indicates his resolve in the battle that’s said to have been going on over the budget.

Labour must be hugely relieved that the stream of stories triggered by the Rawnsley allegations don’t seem to have registered in the polls. As we saw the latest YouGov daily poll recorded no movement.

The real damage, though, is that every day that this remains in the headlines is another news cycle when the focus is not being put on the Tories – and the story of 2010 so far is that the Cameron team has looked less sure-footed when the attention is on them.