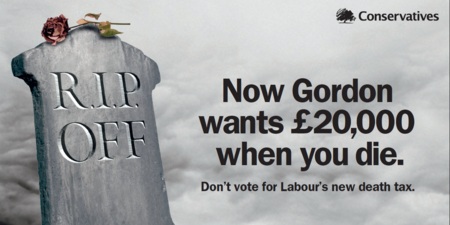 How many of these will there be before the day?

I love politics in the raw. It’s all a spectator sport when it’s how parties and leaders handle issues and who is gaining the advantage. We dissect it here to the nth degree and I for one relish every minute.

So today’s spat between Dave and Gord was entirely predictable. Yesterday the poster featured above started going up and Labour had to respond fast. What’s being attacked, that a charge be made on the estates of those who have had funded long-term care, is one of the options in a policy paper last year, and is therefore on the agenda.

No decision has been made yet but clearly someone somewhere has got to pay what is going to be an increasingly large bill.

So why oh why when Brown was pressed by Cameron did he come out sounding evasive? Surely a straightforward response explaining what was happening would have sufficed?

So who won? In terms of the PMQ encounter it was Cameron. But I can’t help but wonder whether the blue team have diminished themselves a bit on the way.