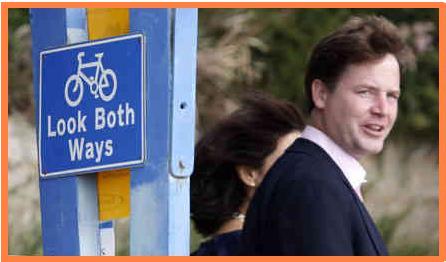 Did Brown want the yellows to be favouring the reds?

Just reflecting on last night’s commons vote on the alternative vote system I wonder whether the received opinion is wrong about Brown’s motives.

The general presumption is that Labour hopes that Clegg and his party will now look at Labour more favourably in the unlikely event of a hung parliament. But hasn’t the aim been much more short-term than that?

For the form of what’s described as “electoral reform” that’s represented by AV is an abomination to the Lib Dems. It doesn’t deal with their main concern that the numbers of MPs each party gets should be in line with how the nation voted. In many way AV makes that worse.

The problem is that for 99% of the population the difference between AV and proportional representation is not one that is easily grasped and apparently Labour are “giving the Lib Dems what they want”.

Clegg and his team knew that only too well but it would have been hard justifying to their members any other course than the one they followed. My reading is that Brown knew this and wanted the Lib Dems to be publicly associated with a major Labour initiative ahead of the election.

This reinforces his “dividing lines” and helps him to portray the Tories as being opposed to reform.

But has he been too clever by half? In the event of a Cameron majority we’ll see a Tory “fair votes” measure. This will use all the same rhetoric of the AV argument but will focus on two measures – equalising the size of constituencies and reducing their number. The voting system will remain intact but you can bet your bottom dollar that the consequential boundary changes will make an early Labour return to power that much harder.

Meanwhile the Lib Dems have been seen to back Labour against the Tories.