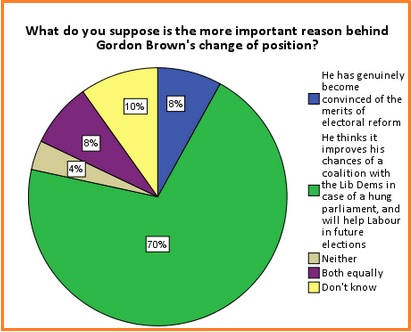 Is a referendum promise really going to help them?

The above is one of the findings from a PoliticsHome poll on Labour’s plan to legislate for a post general election referendum on the alternative vote system.

Although I’m not totally convinced about the wording of the poll questions I think we can draw something from the findings – voters are highly cynical of such a move thirteen years after it first appeared as a Labour manifesto commitment.

The damning figure, surely, is that only 8% think that Brown is “genuinely convinced” – not good with what appears to be a key government measure only weeks before a general election.

The signs are that tonight’s commons vote will go through but I’m far from convinced that there’ll be any benefit to Brown Central. It just seems so opportunistic it could come out as a negative. It can be portrayed as a last ditch attempt to gerrymander the system.

Maybe I’m doing him an injustice but Brown doesn’t seem to get how things can appear.

It’s said that this might help with a post-election pact with the Lib Dems. Really? Labour reneging on the deal with Paddy Ashdown after the 1997 election is still remembered and in any case the AV is not what the Lib Dems want.