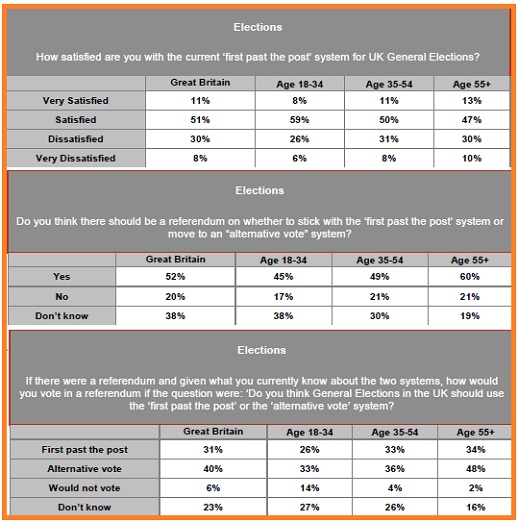 There’s a new poll out tonight from Angus Reid on voter’s attitudes towards electoral reform – particularly the planned alternative vote system on which a referendum is planned and which MPs will decide upon this month.

The survey took place amongst a sample of 2,010 people on Tuesday and Wednesday of this week while Labour’s plans were making the news.

What strikes you immediately from the numbers above is how contradictory the response it. That the first question sees the current first past the post approach being supported by 62% to 30% doesn’t quite fit with the findings on how people would vote if such a referendum took place.

So a poll with something in it for everyone – the product I guess of most people not really caring that much.

The real challenge Labour has with this is that it looks so opportunistic so close to an election thirteen years and three generals elections after a commitment to hold a referendum was first made.

We had a taster of how the political argument would go at PMQs on Wednesday.

PaddyPower is offering 7/4 that such a referendum will take place before 2014.