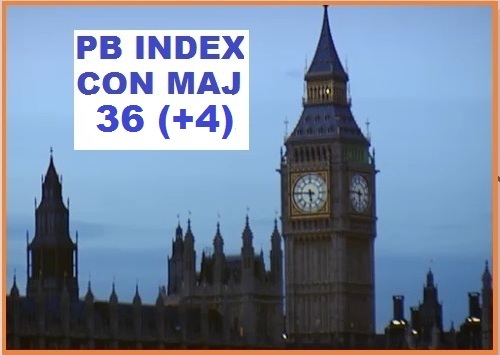 Has the Ipsos-MORI aggregate moved the markets?

After a week which saw a dramatic move against the Tories on the spread betting markets things have now settled down and it is the Tories who are seeing their spreads move forward.

As a result the PB Index, which seeks to extrapolate an election outcome based on what the betting markets are doing, has moved upwards by four seats and is now showing a projected Tory majority of 36.

Although this is progress for the blue team the projection only six days ago was for a majority of 50.

On top of that the markets have been steadied by Cameron’s more sure-footed performance at PMQs on Wednesday.

I’ve had a pretty good punting week. I sold the Tories at 350 seats on Sunday night and closed down the contract at 338. I had the same twelve seat change with a Labour buy bet. Then yesterday I went back in again as a Labour seller and Tory and managed to trade at the markets’ lowest Tory level for nearly a year.