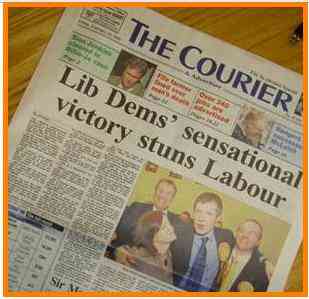 Another by-election has come and gone with another Labour loss and another gain for the Conservatives, only their second since losing power twelve years ago. That rarity says much about the Conservatives but itâ€™s not as if governments havenâ€™t lost by-elections in that time, itâ€™s just that the Tories didnâ€™t win them.
The Lib Dems were the acknowledged masters of parliamentary by-elections. From the heady days of the Alliance onwards, a steady stream of mid-term victories provided a very helpful publicity boost for the third party/ies.

That is, until recently. There have now been ten by-elections in Britain (Iâ€™m excluding Northern Ireland throughout), since the Lib Dems last won, in Dunfermline and West Fife back in February 2006. Assuming that they lose in Glasgow North East – and thatâ€™s as a safe an assumption as they come – it will match the longest winless run the Lib Dems, Alliance or Liberals have had since Jeremy Thorpeâ€™s leadership.

Part of the answer is that it depends on where the by-elections fall. There are some seats where a party stands no chance because there is no natural support and there are other parties better placed to win. But that explanation only goes so far. After all, even if theyâ€™re not in a position to win, they ought to be gaining share. Of the last five by-elections the Lib Dems have contested, their share has fallen in four (and in the other – Henley – their deficit behind the Conservatives increased as the Tory share rose faster than the Lib Demâ€™s).

Apart from the unusual circumstances around the time of the Iraq debates, war and initial occupation, it seems that the Lib Dems are just not very good at taking on a Labour government, especially when the Conservatives are riding relatively high in the polls. For one thing, there simply arenâ€™t all that many Lab/LD seats, compared with the number of Con/LD ones: the Lib Dems have been much more effective squeezing Labour share in Tory seats than Conservative votes in Labour ones. For another, in Scotland and Wales, the nationalists can provide a more credible alternative. A third reason is cultural: the Labour vote in very safe seats can be hard to shift.

Much of the reason for that is historic: the Labour movement dominated many aspects of peopleâ€™s lives in some areas in a way the Tories (and Liberals) never could in their own strongholds: from where people worked via the union (which was often actually or effectively a closed shop), to where they lived via Labour-run council housing, to where they shopped, run by the co-operative, to where they socialised, in the working menâ€™s clubs. These roots ran very deep and though many of those mechanisms have waned in influence or withered altogether, the momentum is still sufficient to keep Labour locked in. There was and is also often a much stronger anti-Tory feeling there than the equivalent anti-Labour mood in safe Conservative seats. The Lib Dems therefore always had a harder time breaking through in places like Sedgefield than in (say) Christchurch.

With more than sixty MPâ€™s, the Lib Dems are now part of the Westminster establishment. Theyâ€™ve run councils across the country and partaken in government in Scotland and Wales: theyâ€™re no longer outsiders. On the other hand, UKIP, the Greens and the BNP are. When thereâ€™s an anti-politician mood, that matters.

All in all, the game has become a lot harder for Nick Cleggâ€™s troops. The Lib Dem machine relied on exploiting other partiesâ€™ unpopularity and their own distinctive and clean image. That distinctiveness is no longer what it was. The Conservatives often provide a better vehicle to kick the government and other parties an opportunity to voice protest on specific issues. Until the election, the tide will remain against them.