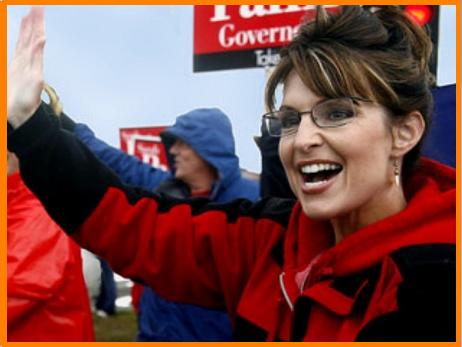 A Guest Article from Socrates

There has been much talk over Sarah Palinâ€™s shock announcement that she is resigning from her post as Governor of Alaska before the end of the first term. The primary questions in much of the coverage have been “What the hell is she up to?” and “Why on Earth does this help her?”

I am convinced the answers are quite straight forward: Sarah Palin has decided to run for the 2012 Republican nomination for the President of the United States, and to do this she needs to get out of Alaska.

Ever since she was picked as John McCainâ€™s Vice-Presidential candidate last year, Governor Palinâ€™s advisers have split into two groups: those who felt she must not lose focus on her political standing in her home state, and those who believe she should quickly leave Juneau behind her and step up to the national stage. The tussle between them has left her operation in a mess since the election.

The more ambitious second group have now won out, no doubt prompted by last weekâ€™s highly critical Vanity Fair piece. (The less than professional resignation speech heavily indicated it had been prepared at short notice.) The piece made many in the Palin camp feel she cannot afford to focus on governing until 2016 while her reputation continues to be trashed in the national media. Her comments in her resignation speech about “plodding along” also seemed to confirm rumours about frustration with her current role.

The Governor will now take part in the ridiculous American charade of running for office while denying doing so â€“ something that contributed to the seeming vacuity of her speech. Her facebook notes talk of a “higher calling” and “forging progress” as part of a movement was couched in the usual language of such a tradition.

Those who claim she can prepare a run for federal office while remaining in her post fail to appreciate a couple of things about her state. The first is that the time zone is four hours behind DC and the rest of the East coast, meaning that early morning news can break and be watched by millions of Americans before the Governor and her staff have even woken up in the morning, making damage control extremely difficult.

The second is that Alaskans tend to be more internally-focused than most, and look very poorly on their politicians continually cavorting off to the lower 48. It takes twelve hours to fly from D.C. to Anchorage, and she could take a heavy hit in the polls if she was caught out of state on campaign activity causing her to be slow to respond to an event breaking back home.

Such travel is essential if she is going to compete for the 2012 nomination. One of Governor Palinâ€™s serious weaknesses is a lack allies on the national stage. The best way for her to amend this is by raising money for Republican candidates across the country.

This will most likely be done through SarahPAC, the political action committee â€“ a necessary requirement to run for federal office â€“ that was unveiled in January. Palin is still the biggest draw for crowds in the GOP and there will be many candidates out there who would promise a lot in return for her support.

She will also start raising money for herself, as Mitt Romneyâ€™s wealth will give him a considerable advantage. Expect Palin to start giving prominent speeches on conservative principles as a way to start raking in the cash. She also needs to get more involved in D.C.-based think tanks, as a way to get conservative media intellectuals back on her side.

So, providing she makes the most of her freed-up schedule, what do we think of Sarahâ€™s prospects? Punters should be careful not to be frightened off by the rumours of ethics complaints, after the Governor was exonerated on all 15 local charges, and with the FBI confirming there is no federal investigation underway.

Palin has been helped considerably by the revelations about Mark Sanford “hiking the Appalachian trail” (to coin a euphemism), as they fish in similar pools of voters. She should now have free reign to scoop up the Republicans who are both fiscally and socially conservative. In a split field, Palin will also benefit the most from second preferences by the time Super Tuesday rolls round, having the widest approval cover among identified Republicans. The lack of a candidate in the race with clear crossover appeal, such as McCain in 2008, will also strengthen her hand in the demographics of the primary electorate.

My overall feeling remains that, while I am extremely sceptical of her chances in the general, she has considerably better prospects than some of the longer odds available for the nomination. These will undoubtedly shorten when she formally announces.

Socrates is a regular contributor to PoliticalBetting.com, who contributes mainly on US politics.