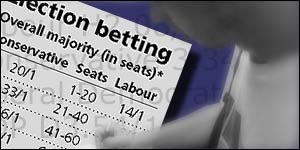 If today’s 3% ICM poll improvement for the Tories is followed by Mori, YouGov and Populus it might just affect the betting. In recent months ICM has usually been showing bigger leads for Labour than the other firms and this might be due to the weighting it attaches to those surveyed who are not certain to vote. In July all the other pollsters had the two main parties within one percent when ICM had a 5% margin. Today that is down to 3%.

We need to focus on this because Labour’s ability to get those who support it actually to vote is likely to determine the General Election.

Our view remains that the Conservatives will be hard-pressed to get more than 220 seats. But those who think that Michael Howard’s party might do better should check Bet365’s 5/2 on the Tories getting 245 seats or more . This is by far the best bet on the Tories that there is and would give you winnings of £250 on a £100 bet. Just compare it with the 11/4 they are offering on the party winning outright which would give you winnings of just £25 more. For that the party would need to get at least 50 more seats.

We think that Labour will struggle to recover by very much in the polls but if you think otherwise then Bet365’s price of 3/1 on Labour getting 360 seats or over offers better value and less risk than the spread markets. That seat level means the party would have a majority of 72.

Bet365 have now dropped their market on whether the Labour majority will be more or less than 51.5 seats. They’ve also sharply tightened the price in the Commons seat market on Labour getting 335 seats or less – a bet we suggested just 10 days ago when it was 2/1. Immediatly after our recommendation it tightened to 11/8 and then, on Monday, it was moved to evens.

A November Election – surely not?

What are we to make of suggestions that Tony Blair might be conisdering calling an autumn General Election – certainly, the price on this possibility has tightened sharply on the Betfair election date market. The suggested date is November 4 – just two days after the US Presidential election.

A recent paper by the Tory economist , Graham Mather, argues that the “economic situation in May is unlikely to be better than in November; interest rates may rise, house prices rises may decline and March may see a difficult budget.” Also he notes that a “Holding an election in 2005 would run into Britain’s G8 presidency in the first half of the year and its European Union presidency in the second half”.

Further, Mather notes, that “the opposition is unlikely to be weaker in May than in November and a November election is well clear of any complications arising from 2005 European constitutional referendums in other countries.”

But we are not convinced. The long-expected election day of o5/05/05 fits in with the four year cycle and would co-incide with the English County Council election in which Labour is expected to do very badly.

Going to the country less than three and a half years after the last election with a massive majority would just lead to opposition charges that Tony Blair was “cutting and running”. 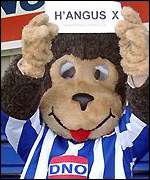 Betting on Hartlepool – punters will have to wait

William Hill have told us that they won’t be opening a market on the “Monkey-town” by-election until the date is fixed and all the candidates are known. This is a pity because there’s a lot of interest. If anybody hears of bookmakers taking bets then please let us know.

Meanwhile Labour’s decision to replace Tom Watson – the Labour MP who was running his party campaign – is probably the best news that the Lib Dems could have had.

His single-mindedness in Hodge Hill over the LD candidate’s job in the mobile phone mast industry allowed him to make this into the issue that saved the seat – just. His campaign style gives activists somthing to believe in and they are absolutely vital in by-elections.

This is where UKIP are weak. Winning Euro votes and seats is a totally different form of campaigning than by-elections where what’s at a premium is your on-the-ground campaigning ability to get your message over, identify your supporters and then get them to the polling station. They will be hammered by the Labour and LD machines on the ground. Domestic issues are what count and UKIP simply does not have a proposition as was shown on June 10 when it failed to make an real mark in local elections that were held at the same time.