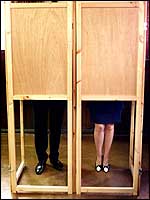 A poll for “shy Labour” as well as “shy Conservative” voters

Every General Election gambler should hope that the Independent newspaper contracts again with the US polling organisation Rasmussen which at the 2001 General Election was the most consistent pollster and the only firm that got the Tory share right.

The firm used the phone to contact people to be surveyed but a computer, not an interviewer, read out the questions. Respondents then typed in a number on the phone keypad to signify their answer. The automated system conducted interviews with whoever answered, and went into the detailed questioning after checking whether they were aged 18+. After corrective weighting to deal with factors such as getting too many women and old people they produced what turned out to be incredibly consistent results.

Alas – not many people knew about the polls because the Rasmussen methodology was deemed as “not approved” by the BBC which banned all reference to the polls on all Corporation outlets. They were strongly attacked by other pollsters and news of the surveys was confined to the smallest national newspaper – the Indpendent. The fact that the Tory and Labour shares stayed so constant throughout the campaign undermines the argument by the main-stream pollsters that there was a “late swing”.

To their credit members of the UK opinion polling establishment who had been very sceptical did acknowledge Rasmussen’s success afterwards.

The Rasmussen philosophy is based on the main difference between being interviewed by a polling organisation and actually voting is the human interface. For voting is a very private act. You put your X against the candidate of your choice, fold the paper so that the printing is on the inside and then put it through the slot in the ballot box you. You can have no fear of dissapproving looks from those you are close to or even those supervising the election because the ballot has been secret.

This has been the big argument in favour of internet polling – the interviewee is dealing with a computer and not a real person so that all those human interface issues do not come into it. But only about half the population is online and this the protagonists say can distort the sample.

Let’s hope the Indy uses them again and the BBC bases its selection of “approved polls” on those with a proven record of accuracy. It will be good to have another pollster using a completely different methodology that does not have the human interface factors of the conventional pollsters and avoids the sampling issues of internet polls. Given its extraordinary record last time with the Tory share – and not too bad with Labour, it will be a good cross-check on the others.