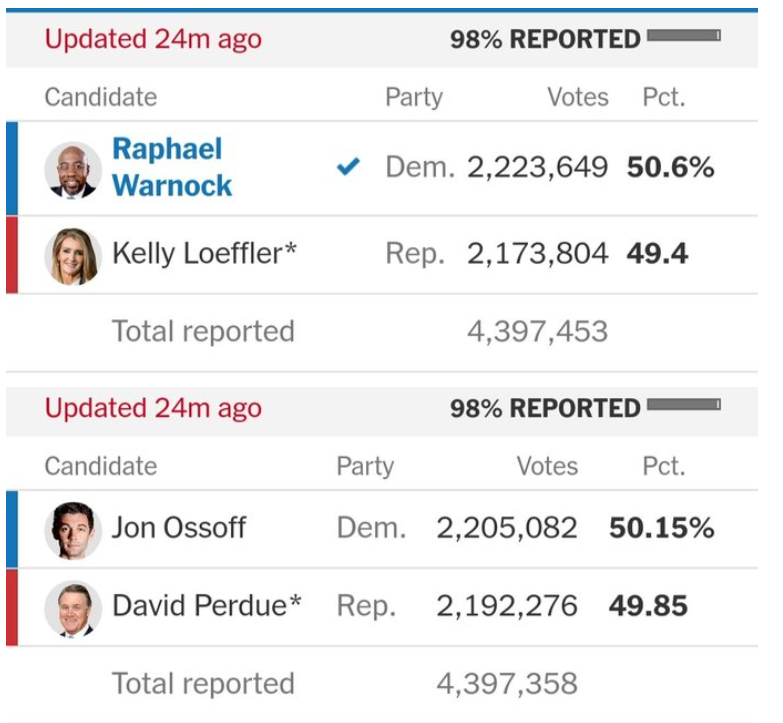 The above from the New York Times shows the big American news overnight that the Democrats look all set to take the two Georgia runoffs seats. This is hugely significant as it means that in the new Senate the split will be 50/50 between the Democrats and the Republicans. Because the casting vote goes to to the Vice President, Kamala Harris from January 20th, Biden will become a President in 2 weeks time with his party controlling both parts of Congress as well as the White House.

This will make it much easier for him to push forward with his agenda agenda starting initially with his choices for cabinet positions which have to be approved by the Senate.

The elections were caused because in the two senate elections on November the 3rd in Georgia no candidate secured 50% of the vote. This requirement was mandated by a state law introduced nearly 30 years ago go as a means, as was suggested at the time, of suppressing the black vote. Indeed in every runoff election since the Republicans had won every such race until now

For punters who bet with Betfair this outcome will not be regarded as the Dems taking the Senate because of the arcane way the exchange defines Democrat votes. I’m on with Smarkets who have a different rule.