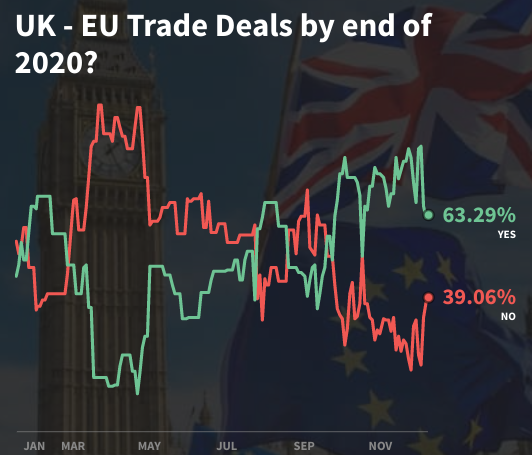 The price of failure and could be very high

Time is running out for a deal to be reached between Britain and the EU and all the signs are that things are going badly. A lot rests on whether Boris can find a last ditch way forward that’s acceptable in Brussels and to his own backbench MPs. The above chart from Smarkets illustrates how punters are reacting.

The cost of a non deal could be very high as Matthew D’Ancona writes under the headline Brexit is for life not just for Christmas:

It matters a great deal that he succeeds. Failure would lead to tariffs, border checks, and nightmarish disruption at ports; the status of aviation would be unclear; new travel restrictions would apply to UK citizens entering the EU, as would mobile phone roaming charges; collaboration in healthcare, research and security would be jeopardised; and the Irish border would become a scene of confusion, commercial chaos and diplomatic tension – especially if the Internal Market Bill, back in the Commons this week, includes the so-called “safety net” clauses enabling UK ministers to breach the Northern Ireland Protocol that is a crucial element of the 2019 withdrawal agreement.

That last element highlights the difficulties Johnson could find himself with in his relations with President-elect Biden who has already made his view very clear on the position of Ireland.

My own view is in line with the betting – the favourite must be a deal but I’m not as confident as I was.