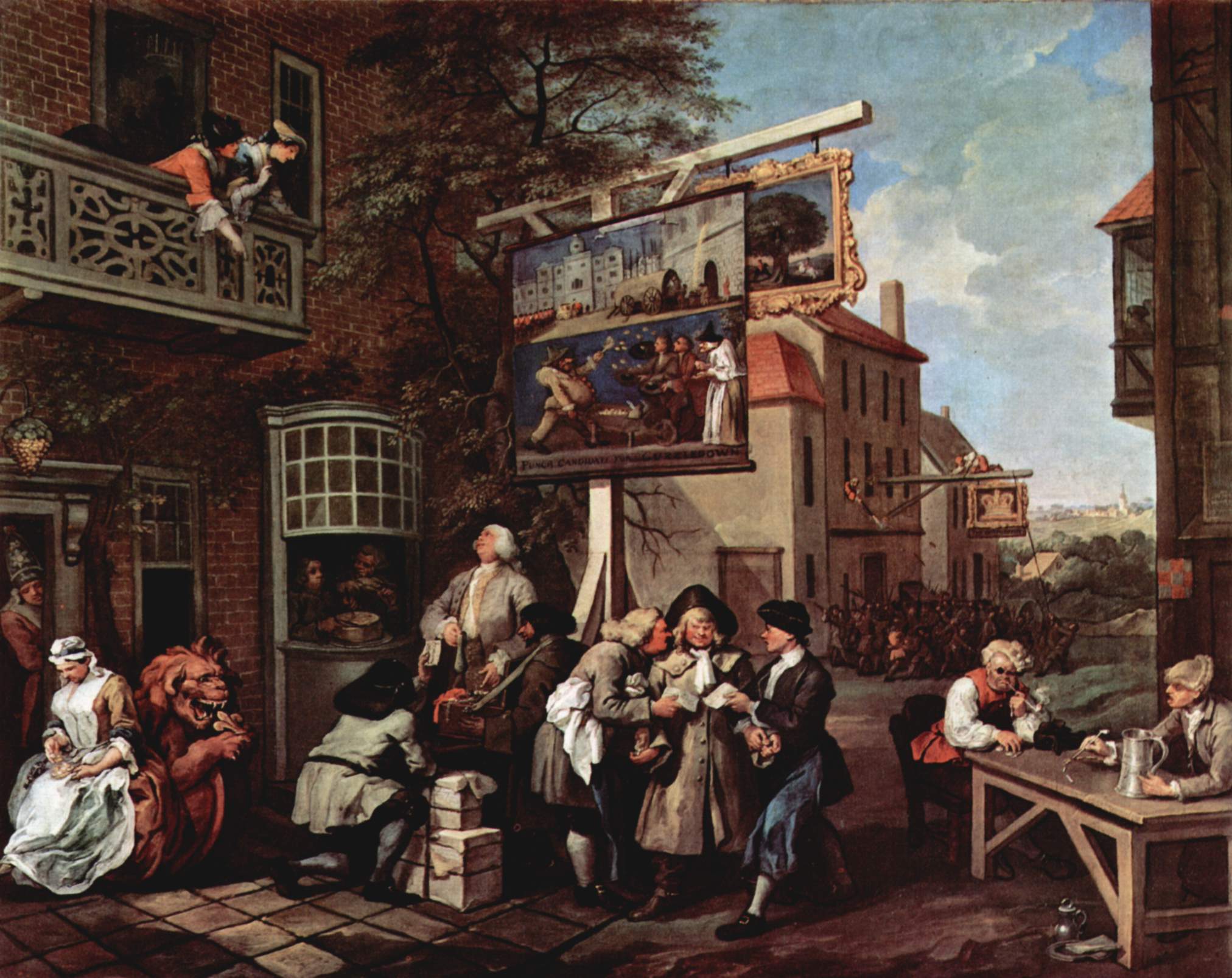 Political Betting doesn’t often discuss exhibitions of 18th century art, but I can highly recommend the Hogarth exhibition currently showing at the commendably eccentric Soane Museum in London. It is a very rare opportunity to see in one place all of Hogarth’s masterly sequences of ‘Modern Moral Subjects’, including A Rake’s Progress, A Harlot’s Progress, and Marriage A-La-Mode.

Most topical, though, is The Humours of an Election (1754-1755), depicting a (literally) hard-fought election in the two-member constituency of Guzzledown, Oxfordshire. In the first painting we see a riotous dinner where the two Whig candidates (one is ‘Sir Commodity Taxem, Bart’) are soliciting votes in joyously dubious ways whilst the Tories parade outside with an anti-Semitic banner (some things were different in those days). The Whig election agent falls back having been hit by a brick thrown through the window. Look carefully and you can see his canvassing returns (‘Sure’ and ‘Doubtful’ – a lot of Doubtfuls but only one Sure). In the third painting we see polling day; the Tory GOTV operation seems to be very effective as the dying and infirm are being dragged up to cast their votes, while the Beadle, who is supposed to ensure that the election is properly conducted, is fast asleep. Meanwhile there is a dispute about whether a soldier veteran, who has lost both hands, can take the necessary oath by placing his hook on the Bible. No-one cares that the coach carrying Britannia is in trouble as the two coachmen are absorbed in playing cards, with one of them cheating. In the fourth painting… well, go and see for yourselves.

Most relevant to today is the second painting, Canvassing for Votes, shown above. In the centre is a canny voter taking bribes from both sides. The landlady is counting her profits. The Tory candidate, beneath a campaign sign showing money pouring into Guzzledown, is buying trinkets from a pedlar to curry favour with the voter’s daughters on the balcony. At the back the Whig campaign HQ, the Crown Inn, is being attacked in an act of self-harm by a mob indignant at excessive taxes, with one stupidly sawing away at the sign which will crash down with him on it into the crowd below.

Of course, nowadays our elections are much less crude. We no longer have candidates using their own wealth to bribe voters to support them. Instead we have politicians trying to bribe us with other people’s money, or more subtly, with our own. We have even progressed as far as having politicians successfully bribing us with an entirely fictional number painted on the side of a bus.

Nonetheless the central problem remains: inasmuch as voters pay any attention, they pay attention to the wrong things, to pedlars’ trinkets rather than real issues. So let me cut to the chase and focus on a few key questions which voters and journalists should be asking of the three main party leaders:

To Boris Johnson: “You know perfectly well that there is no chance of having a trade agreement agreed and ratified by the end of next year. So which is it: a crash out at the end of next year with the No Deal you’ve sought to avoid, or an extension which you’ve pledged not to ask for?”

To Jo Swinson: “You know perfectly well that you are not going to be PM. If the Conservatives get a majority, we will have left the EU at the end of January; would you then help Boris implement a trade agreement against the inevitable opposition of the ERG? Or, if the Conservatives don’t get a majority, which of Corbyn and Johnson would you help into No 10, and on what terms?”

To Jeremy Corbyn, or if you want a more coherent answer, to John McDonnell: “You know perfectly well that all the spending commitments you’ve made aren’t a programme for government, they are an unfiltered and unsorted wish-list of eye-wateringly expensive suggestions. Which are your priorities, and which are just fantasies?”

Don’t expect answers, but if you are in London, do go to the Hogarth exhibition. It is on until the 5th January. Top tip: take a magnifying glass.