The next election result is likely to be a strange one, as the following Ipsos-Mori tweet alludes to

(On a follow up tweet they noted that it should read no majority government, Wilson’s calling of a swift 2nd election in 1974 produced a small uptick for him).

Indeed if all those rules are fulfilled it might be the weirdest result of all (the Conservatives losing votes but dramatically improving their efficiency of transferring them into seats, the greater number of Lib-Con seats might help with that, but unlikely to be enough).

So much of our image of naturalÂ politics is seen through the last 70 years, 1945 might as well be year zero for the dividing line it is used as for meaningful historical comparisons. Historical facts like these are sometimes trotted out, ranging from the useful to the interesting to the extremely tenuous.

Perhaps over time we’ll come to see the post-war years as if not an anomaly, just one more period of British politics rather than the natural definitive state.

‘England does not love coalitions’ is the famous and (since 2010) commonly quoted declaration by Disraeli, which is a quote that doesn’t bear up to much scrutiny. 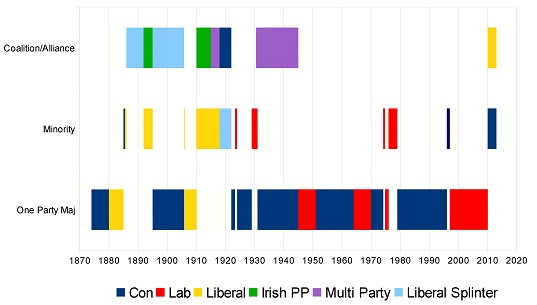 (In place of scrutiny I’ve put together a cheap bar chart, see end of article for proper scrutiny)

In 1918 Margot Asquith faced with a divided Liberal party,Â one half inÂ Coalition with theÂ Conservatives and a nascent Labour party,Â wrote that things would be better as soon as we get back to “normal politics”. Obviously the situation had shifted and normal politics never came back.

A few years back Iain Mclean wrote an excellent piece delving more deeply into the coalitions in the UK that I’d encourage people to read or re-read by clicking here.Â (That’s the good scrutiny I mentioned earlier)