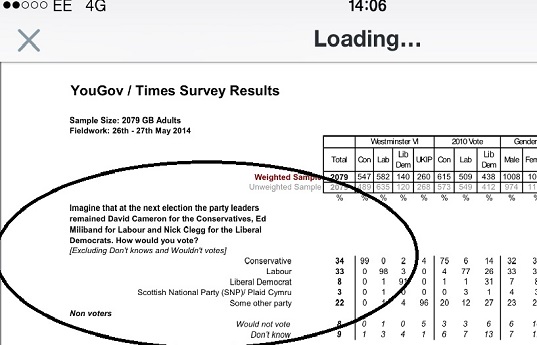 As part of their polling for The Times, YouGov asked “Imagine that at the next election the party leaders remained David Cameron for the Conservatives, Ed Miliband for Labour and Nick Clegg for the Liberal Democrats. How would you vote?”

Normally they ask “If there were a general election tomorrow, which party would you vote for? Conservative, Labour, Liberal Democrat, Scottish Nationalist/Plaid cymru, some other party, would not vote, donâ€™t know”

Now the first thing that caught my eye was the fact that the Tories are ahead with YouGov for the first time since March 2012.

Sadly for my bets with Paddy Power, this can’t be considered a Tory lead/crossover with YouGov.

The changes from the normal question conducted at the same time for the Sun using the same panel (sample size of both is the same) is Con plus 2, and Labour minus 1.

The most interesting finding is that mentioning Ed’s name has no major change for Labour, mentioning Dave’s name is a boost for the blues, but well within the margin of error.

My only caveats are that is only one poll, and in the past when Ed’s name was a drag, it was generally when Labour were polling in the 40s and had leads of around double digitsÂ so there maybe much less opportunity for drag available as Labour’s support has fallen since then.