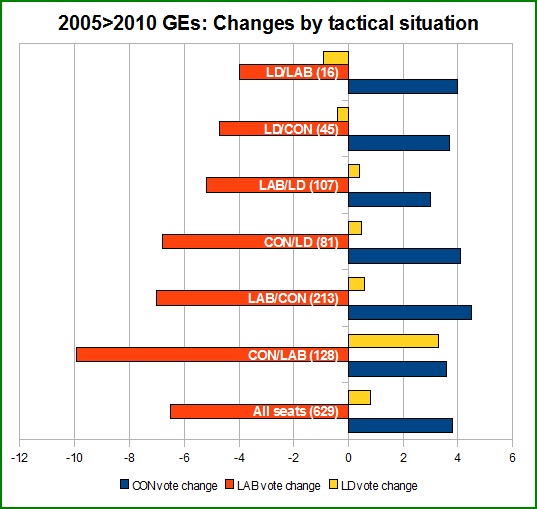 If this is right it is good news for the blues

showing the mean vote changes of the main parties in different categories of seats based on which came first and second in 2005. In doing it gives an interesting picture of what happened with, perhaps, some pointers to next time.

The Labour vote showed the largest range with, interestingly, the biggest drop-off in support in those seats where it didn’t matter – those where the Tories were in first place over Labour in 2005. It is this element, lower turnouts by LAB supporters, in non-battlegrounds that’s one of the factors why the electoral system seems to be biased to the reds.

Notice how in the CON-LAB segment the LDs enjoyed their best performances. So the main “Cleggasm” switchers appear to have used their votes in a way that didn’t impact on the outcome.

Looking at the detailed Ashcroft data I wonder whether the same will happen at GE2015 – the biggest UKIP shares being in the non-battleground seats.

In seats where the yellows were fighting LAB at GE2010 there was no sign of any anti-Labour tactical voting from Tory supporters. The Ashcroft polling didn’t cover LD-LAB battlegrounds so we don’t know.

In CON-LD battle-grounds there doesn’t seem to be much evidence of any new tactical voting by Labour supporters to stop the blues making progress. Will that remain?