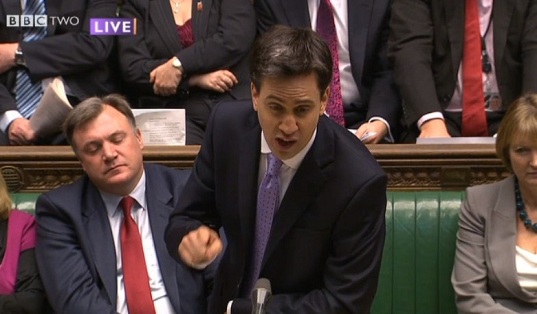 The debate on Syria has highlighted one of the advantages of Ed Milibandâ€™s leadership. As someone who was not even an MP or in the country when the decision to invade Iraq was taken, the Labour leader is able to make policy decisions today free from some of the political shackles of the past.

This is far easier for him than his former leadership rivals (with the exception of Diane Abbott).Â  Itâ€™s far harder to hit a moving target and Cameronâ€™s attacks on the failures of the war with Iraq would not have troubled the Labour leader.

Labourâ€™s current Shadow Cabinet members have had plenty of time to demonstrate new approaches and demonstrate some lessons learned from the late Blair years and the time under Brown. It seems that those Shadow Ministers that have failed to adapt are among those providing Labour the biggest headaches.

An opposition leader craves options. Theyâ€™re rarely in charge of events and when they do have an opportunity to respond the last thing they want is for their hand to be limited by cards played by their predecessors.Â  Similarly a party that has lost such a large number of votes needs to appear up to date and demonstrably in touch with the mood of the time.

Rachel Reeves has been able to push for policies such as a â€˜living wageâ€™ that some of her colleagues refused to implement when they were in office. Itâ€™s not that everything or everyone from Labourâ€™s years in government should be dismissed, but sometimes having someone not clearly confined to the past can make the case for achievements in years gone by.

For example Chuka Umunna can arguably make a stronger defence of the difference Labour made to the countryâ€™s infrastructure precisely because he wasnâ€™t a minister at the time and can reflect on what worked and what didnâ€™t.

To his credit Douglas Alexander has been one former minister been able to â€˜move onâ€™ and is a better Shadow Foreign Secretary as a result. Positive about the UN in terms of Palestinian rights and on Syria he looks far less like the identikit New Labour minister of years gone by.

Maria Eagle has also been able to look afresh at transport policy and make the case for public ownership of rail. Caroline Flint has been nifty on her feet over energy issues and looks like a smart survivor who can adapt. Sadiq Khan as Shadow Justice Secretary has captured the mood Â that shows greater respect to civil liberties which was needed following Labourâ€™s excessively authoritarian approach particularly by its Home Secretaries.

To a lesser extent Andy Burnham has been able to defend Labourâ€™s health record but at the same time recognise mistakes such as over-reliance on private finance. Yvette Cooper has frustratingly largely remained a conventional New Labour politician outflanking the Coalition from the right on issues such as immigration but has embraced the fight for womenâ€™s issues and the way theyâ€™ve been hit hardest by cuts.

Liam Byrne has demonstrated some sensitivity to welfare issues such as the disabled, and although he has looked out of step with his leader and party on other issues around benefits, he is at least closer to where public opinion is.

Ed Balls on the other hand has said and done little that would have been out of place under Blair or Brown. Given the scale of financial crash that has taken place, this is extraordinary. From the height of his Bloomberg speech in the leadership election, thereâ€™s been next to no new fizz or flavour to his pronouncements.

Stephen Twigg is also anchored to the past through his uncritical support for academies and the logic of free schools. Other â€˜anchorsâ€™ include Hilary Benn who has said little to set the world alight in terms of local government which given the scale of cuts theyâ€™ve faced and how itâ€™ll have to operate differently is a huge lost opportunity.

Ed Miliband wonâ€™t be able to announce a Shadow Cabinet entirely of his own choosing. No leader can. Political balances and alliances in the party have to be respected and reflected. But his job of winning a majority at the next election will be easiest with Shadow Cabinet Members who can demonstrate their ability to move with the times.

With less than two years to the election, clearly not all can. Heâ€™ll need to weigh up how many of them are weighing down his partyâ€™s fortunes.