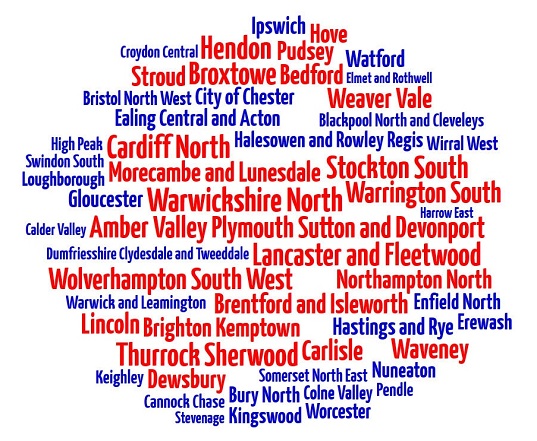 Corporeal looks at the yellows in CON-LAB battle-grounds

There seems have been few Conservative tears shed over the decline in Lib Dem poll ratings, but there might be at least a few blues quietly hoping for a yellow revival.

The polling suggests that the Lib Dem vote will be declining severely. This will obviously affect the results in Lib Dem held seats (we’ll get to those) and have MPs facing LD challenges sleeping rather easier, but it’s also going to be a wild card factor in seats where the party is in a significant third place. With this in mind I’ve put together a list (and a tagcloud graphic-y thing) of seats in just this situation, starting here with Conservative held ones.

I’ve ordered the seats by the ratio of the Lib Dem vote to the Conservative lead over Labour, so for example in the largest name of Warwickshire North the Con lead is ~0.1% compared to a LD vote of 11.6%, or ~1:100 (0.86:100 to be exact). The boundary I set was for seats where the LD vote was at least twice the size of the Conservative lead giving me a list of 56 seats, (I found 97 seats in total where the LD vote exceeded the size of the Con lead, but I didn’t do an exhaustive check for this second boundary).

As I noted previously the past vote results in ICM’s polling suggests that the voters leaving the Lib Dems are very heavily skewing towards Labour (with a nod to the mysterious half of the don’t know respondents ICM reckons won’t vote Lib Dem again). While uniform national swing is a dirty word on PB (with good reason) I’ve broken down how this would affect these seats if Labour and the Tories fought each other to a standstill and the only change was in the Lib Dem vote (using the 3 month average of the Guardian ICM polls). Those seats are the ones coloured red and make up 25 of the 56.

Perhaps the Conservative MPs of these constituencies might consider a donation or two to their local Liberal Democrats, because without a revival they might find out that the bell is tolling for them both.

Update: Labour yesterday released it’s list of target seats, which for obvious reasons overlaps significantly with these seats. If these are the seats the election will be fought over, then a Lib Dem collapse looks like tilting the battleground in Labour’s favour.