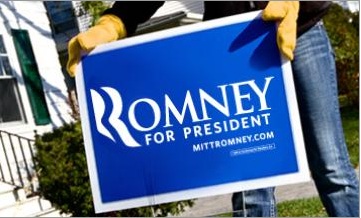 It might be down to Obama’s summer ad offensive

So far today there’ve been five national polls on the November 6th election and Romney is leading in four of them.

The picture is totally different in polling from the key battle-grounds where Romney’s debate bounce has been much smaller. Why’s this happening? What is different about the states where it matters.

There’s an interesting theory by Nate Cohn in the New Republic.

“. Simply put: campaigns might matter. There hasn’t been a campaign where the battleground states have endured so many advertisements for so long before the rest of the country even began to tune in. This was also a campaign where the conventional wisdom has long held that attacks on Romney did a lot of damage, especially in Ohio. While most of the country tuned in and saw Romney unadulterated by months of advertisements, voters in the battleground states might have more entrenched and cynical views of the Republican nominee.”

I think that there’s a lot in this. The Obama campaign launched into huge TV onslaughts in June and July almost all of it negative. The aim was to shape views of the then presumptive nominee before the conventions. The scale of the attacks and the costs caused many observers at the time to speculate that the President could run out of money and many questioned the wisdom of the strategy.

If the Cohn theory is correct, and we’ll get a better idea in the next few days, Obama might have won the election four months early.