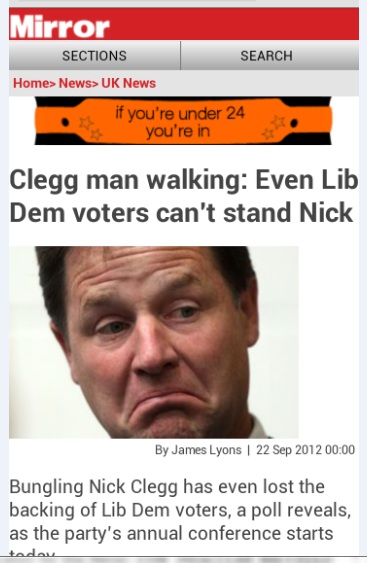 Just 25% of LDs think they’ll do better keeping him

A new Survation poll for today’s Daily Mirror, taken partly after Clegg “Sorry” video shows no change for the party, The only movement on the firm’s last poll in the Mail on Sunday a month ago has been a three point increase in the LAB vote at the expense of others.

The firm almost always reports the biggest shares for Farage’s party because it is the only pollster to prompt with UKIP in the main voting intention questioning. Survation argues that by not doing this other pollsters are favouring the main three parties particularly the Tories.

As can be seen above the Mirror is highlighting the findings in relation to Nick Clegg with the paper noting:

“The research for the Mirror shows that in the wake of his botched apology over tuition fees, Mr Cleggâ€™s approval ratings are through the floor on minus 31.

Our study shows that more than a third of Lib Dem supporters believe the party would be more popular with Mr Cable, 69, in charge. Only a quarter think they are better off keeping Mr Clegg.”

The poll did ask voting intention questions with Cable named as leader and found that the yellows would be up by two points.

Polling like this is all about how it shapes the narrative and, in this case, whether it will impact on Clegg’s leadership.

It doesn’t take too long to work out what the Mirror would like to happen.

There are a lot of surveys in the pipeline and I’m expecting at least three or possibly four in the Sunday papers.