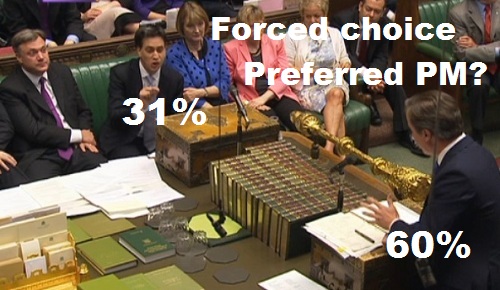 When forced to choose just 31% want Ed as PM

That’s the biggest lead we’ve seen since the election in a telephone poll where certainty to vote is one of the key determinants.

On the face of it, then, seriously good news for Ed Miliband and seriously bad news for David Cameron. But the Times report had this sting in its tail:

The other 37 per cent say they are dissatisfied with the job done by Mr Cameron but still prefer him to Mr Miliband.“

This polling reminds me of what we saw in Scotland ahead of the Holyrood elections in May 2011. Until a month before polling day Labour was enjoying a substantial lead across the range of pollsters and looked set to become once again the top party in the Scottish Parliament with some indications that it could achieve an overall majority.

The pointers that perhaps all was not well for Scottish Labour were the leader ratings when their man was compared with Alex Salmond. Iain Grey was miles behind the SNP leader and in some surveys was even behind his Tory counterpart. In the end the SNP was returned but this time with an overall majority.

Could Populus be pointing to a similar outcome at the general election?

When you are voting, of course, you are in effect making three choices. One for a party, a second for the local candidate who will represent your interests in parliament, and, of course, who you want as your Prime Minister.

Looking at things solely in terms of party tribe is only part of the story.