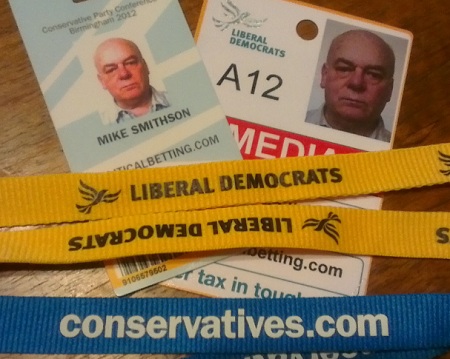 Everything contenders say will be scrutinised & magnified

Just six days to be before the start of the 2012 party conference season and my betting is that leadership issues will be a common theme at at least two and possibly three of them.

We’ve seen the media obsession with both Boris and Vince and with Labour Ed Miliband has yet to fully convince the home team.

An indication that there might be trouble ahead is that with the Tories and Lib Dem in recent weeks we’ve seen polling suggesting that both parties would be doing quite a bit better if they switched to Johnson and Cable.

Let’s not forget that those polls have had negative numbers for Ed Miliband – for almost every time the voting intention prompt includes the name of the Labour leader the party’s share drops by about three points.

For those being named as potential candidates the speculation adds an extra pressure. Everything that Vince and Boris say will be looked at for hints and the media is going to be on the look-out for delegates prepared to go in front of a camera saying there should be change.

Generally, though, gatherings of the party faithful see it as their duty, at least in public, to back the status quo.

Who will ever forget that amazing eight minute long standing ovation that Ian Duncan Smith received at the 2003 Tory conference less than four weeks before he was ousted?

For Cameron there’s more rumbling in today’s Sunday Times. This is what it is reporting:-

Disaffected Tory MPs from across the political spectrum are plotting to oust the prime minister. One scenario could see a caretaker leader installed to take the party through the next general election.

The rebels, who include sacked ministers and Cameron loyalists, are furious that ministers who supported the government â€” including four loyal Tory whips â€” were sacked without explanation. Groups of plotters have been canvassing colleagues to put in letters demanding his resignation.

There are lots of betting markets which we’ll review in later posts.