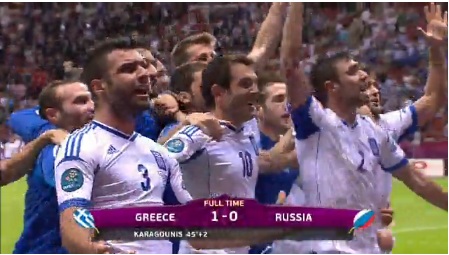 Will the exultation be better for Syriza or New Democracy?

Today’s crucial general election in Greece takes place after a dramatic victory for the country in Euro 2012 which ensured that it has a place in the quarters finals.

Fans were celebrating into the early hours and there’s little doubt that sporting success like this can affect the mood of a whole nation. Thus many Labour figures put down the party’s defeat in the 1970 election to the outcome of a crucial England match in the World Cup a few days beforehand.

So what could last night’s victory over Russia do to the mood of Greek voters.

Could it encourage defiance of the international pressure and lead to the defiant Syriza party getting an edge.

Or could it help New Democracy which is committed to implementing the austerity measures being demanded of the country.

This is a serious question because the polling suggests that the election is very tight and anything that could impact on voter behaviour has to be taken into consideration.

It might be that the result has helped restore some Greek pride which must have been battered by events of the last few months.

I find it hard to say which party will benefit but I do believe it will have an impact.

Greek Election results: Paul Maggs (Double Carpet) will be doing a thread later on in the afternoon