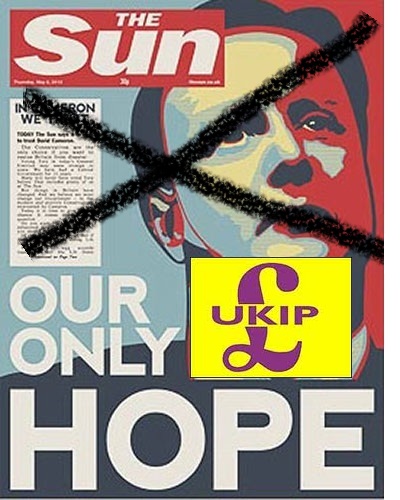 One consequence of the phone hacking scandal is that thereâ€™s almost no chance of The Sun backing Labour in 2015. Ed Miliband has gone out of his way to pick a fight with the Murdochs and itâ€™s doubtful whether heâ€™d want the endorsement even if it were on the cards, which it surely isnâ€™t.

So if itâ€™s The Sun wot wins it then it will back the Tories then? Well yes, if you accept the â€˜ifâ€™. Despite the rise in the share of minor parties â€“ a rise seen in many countries at the moment â€“ the leader of either Labour or the Conservatives is overwhelmingly likely to form the government after the next election.

The Sunâ€™s claim was always overstated in 1992 and is even more so now. The Toriesâ€™ lead dropped in the polls after The Sunâ€™s backing in 2009 and they failed to win an outright majority (though the paperâ€™s election day issue was primarily an endorsement of Cameron and he did become PM, so they did back the winner in that sense).

Furthermore, papers simply donâ€™t reach as many as they used to – newspaper circulation in general has been falling for years and thereâ€™s every reason to assume that will continue. On top of that, The Sun appeals most to the sort of demographic which has seen one of the biggest falls in voter participation since its alleged 1992 triumph.

Not that this is to say that the paperâ€™s stance is irrelevant; far from it. If their positive support has little effect, their negative reporting can be very important both in its ability to reinforce public perceptions through repetition of minor but memorable examples, and in disrupting a party from re-establishing its own narrative. Thatâ€™s true of other papers too, though The Sun â€“ with the biggest circulation and a more sensational style than some others â€“ has most scope to do so.

Is it still interested in backing the winner and so preserving the myth of its impact? Given Milibandâ€™s refusal to play the game, there are good reasons for it not to be. If the Tories look well set to perform somewhere near their 2010 score, The Sun is likely to remain on-side: the temptation to keep up its record and do its best to prevent a party clearly hostile to News Internationalâ€™s interests taking power would likely be too great.

On the other hand, if â€“ as is currently the case â€“ the Tories arenâ€™t likely to form a government, the risk to its reputation involved in backing the loser are greater than in not backing the winner.

With the Lib Dems and Labour surely out of the running for a Sun endorsement, might the EU-hostile paper take the opportunity to skip all three established parties and back UKIP?

Thereâ€™s an awful lot of Euro-water to flow under the bridge before 2015, not least this weekend. Thereâ€™s even an outside chance there wonâ€™t be an EU by then. Assuming that there is, and that itâ€™s more integrated than now â€“ the most likely scenario â€“ UKIP will offer a very attractive protest vehicle both to voters and papers appealing to them. Indeed, it already does looking at the polls. The biggest risk in such an endorsement is probably UKIP itself, still a pretty amateur organisation. Even so, in the relative game that is politics, it may end up for The Sun as the least unattractive option.