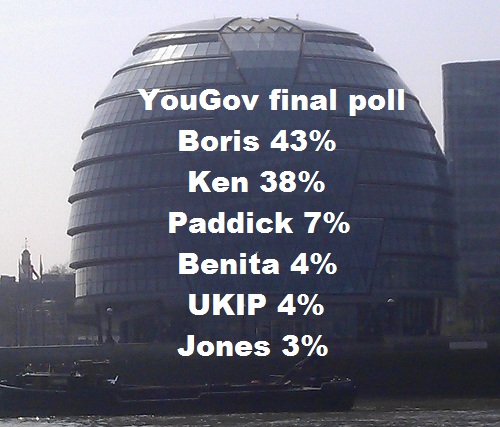 After the second prefs have been allocated YouGov has Boris beating Ken by 53 to 47%.

A big question is whether YouGov will continue its stunning success with this particular election. In both 2004 and 2008 its final poll got the outcome correct to within 1%.

The poll contrast sharply with the one phone poll of the campaign by Populus which had a Boris 1st preference lead of 12%. The internet firm polled the last so should be closer if opinion is moving.

There are a mass of elections today but it is only the mayoral race which had seen a lot of betting.

This post will be updated as soon as we get the numbers.

YouGov poll based on those “certain to vote”. Amongst all those expressing a choice the split was 50-50 with Boris ahead by a whisker.