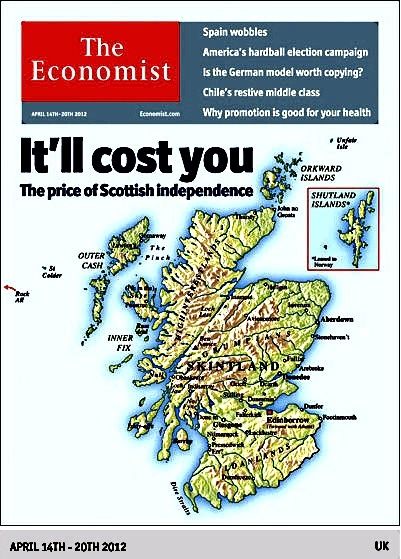 What’ll the “Economist cover” do to the referendum?

Above is a version of what’s said to be the front cover of the latest Economist which hasn’t going down too well in nationalist circles overnight north of the border.

As can be seen Scotland has been renamed “Skintland“; the country’s capital becomes “Edinborrow“; the Orkneys and Shetlands are dubbed the “Orkward” and “Shutlands” islands while the Lowlands region is termed “Loanlands“.

Amongst the other re-namings are “Grumpians” for Grampians, “Aberdown” for Aberdeen and “Dunfor” for “Dundee”. Somebody has had a great deal of fun producing this.

What I am not so sure of is whether this is a genuine Economist cover or not.

Certainly looking at Economist.com we see the main cover story is about the US election following the withdrawal of Rick Santorum from the Republican nomination race.

Doing a search of the site for the term “Skintland” produces a nil result.

Even if this is a spoof it’s likely to have an impact. It will get emailed all over the place and could be seen by many more people than actually visit the Economist’s site. It feeds into perceptions of what the English are thought to feel about the Scots thus reinforcing views.