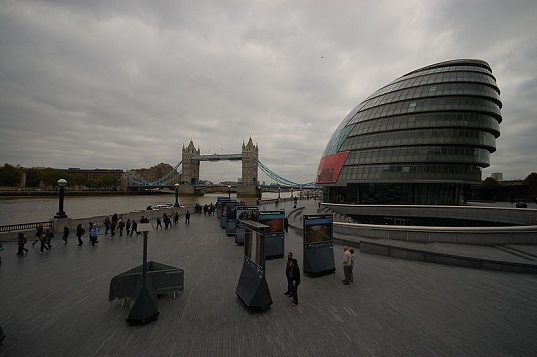 Sean Fear asks if this is a big chance for LAB?

The London Mayoral contest rightly commands the lionâ€™s share of public attention. There is, however, another set of elections, due to take place on May 3rd, for the London Assembly. The Assembly is a fairly toothless body, but it does offer a high profile to its members, some of whom, such as Bob Blackman, Angie Bray, Meg Hillier, and Bob Neil, have made their way into Parliament.

The Assembly has 14 members who represent constituencies, elected by first past the post. In addition, a further 11 members are elected on a London-wide basis, by proportional representation. In 2008, the Conservatives won 11 seats, including 8 constituencies. Labour won 8, including 6 constituencies. The Liberal Democrats won 3 top up seats, the Greens 2, and the BNP 1. How will the parties fare this time?

There have been no polls of voting intention for the Assembly. However, Yougovâ€™s most recent Mayoral poll gives Westminster voting intentions for London of Labour 46%, Conservative 34%, Liberal Democrat 9%, UKIP 5%, Greens 3%, Others 3%. It is probably unlikely that the Conservatives and Labour will take 80% of the vote between them in the Assembly elections, but it is entirely plausible that Labour will lead the Conservatives by 12% at constituency level (minor parties can expect to gain at the expense of both Conservatives and Labour in the top-up seats). This would represent a swing of 10.5%, compared to 2008.

Were that to be the outcome, Labour could expect to hold all six of its current seats, with increased majorities. These are City and East, Lambeth and Southwark, North East, Greenwich and Lewisham, Enfield and Haringey, and Brent and Harrow. The last two produced very tight contests in 2000, 2004, and 2008, but both should be comfortably held by Labour this time round.

The Conservatives can expect to hold Croydon and Sutton, South West, West Central, Bromley and Bexley, and Havering and Redbridge. They are vulnerable in Barnet and Camden, Merton and Wandsworth, and Ealing and Hillingdon, all of which would fall to Labour on a 10.5% swing. In my view, Barnet and Camden is very likely to fall, as it requires a swing of only 5.5% to Labour, and incumbent Brian Coleman is unpopular among London Conservatives. Ealing and Hillingdon would fall on an 8.1% swing. The Conservatives have 70 councillors in the two boroughs, compared to 69 for Labour, so it will be very tight. In my view, Labour will be slight favourites in this seat, given the ongoing swing to Labour since 2010. An 8% swing would see Labour take Merton and Wandsworth as well, but the Conservatives are completely dominant at local level in both Wandsworth and Wimbledon, which should make them slight favourites to retain the seat.

The Liberal Democrats and the Greens will be battling for third place. 9% or so would see the Liberal Democrats awarded 2 seats. The Greens are below the 5% threshold in Westminster voting intentions, but they won 8% across London in the local elections of 2010. I would expect them to match that in May, and retain their 2 seats. The BNP have collapsed over the past couple of years, and are most unlikely to retain their seat on the Assembly. I would expect this seat to be won by UKIP, who will likely pick up some white working class voters who backed the BNP in 2008, together with Conservatives who are unhappy with the Coalition.