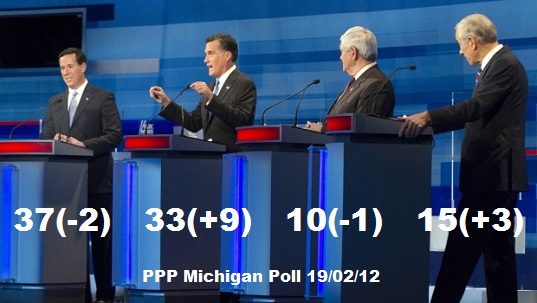 But Santorum has 22% lead in favourability ratings

There’s a new poll out from Public Policy Polling on next week’s crucial Michigan primary which many pundits are suggesting could be the most decisive of the whole nomination campaign.

This is, of course, Romney’s home state where his father was once governor and which he won comfortably in the primary in 2008. He really needs a victory there to head off his critics.

As can be seen from the numbers Santorum has dropped a couple of points to 37% on what PPP recorded last week. The big move has been the increase in Romney’s position up to 33% by a huge nine points.

Interestingly, and perhaps most significantly, the Romney effort has done nothing to blunt Santorum’s favourability ratings. Last week he was 67/23 and these numbers remain the same. Romney sees his favourability numbers move up from +10 (49/39) to +20 (55/35).

The pollster notes: “What we’re seeing in Michigan is a very different story from Florida where Romney surged by effectively destroying his opponent’s image- here Romney’s gains have more to do with building himself up.

What’s clear is this is a very close battle which is too close to call. There is also this from the pollster about Arizona, which votes on the same day, and Washington state which is four days later.