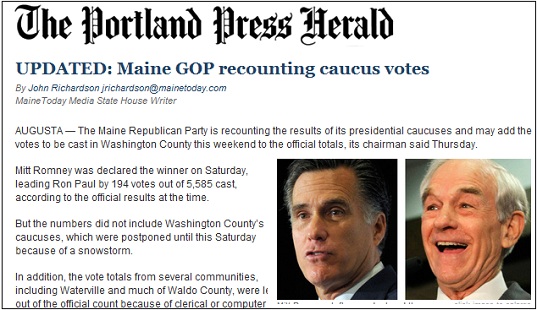 How come all the initial errors are in his favour?

If you think that we have been here before we have. After the debacle in Iowa at the start of January which led to Mitt Romney’s victory on the night being taken away from him there now must be a good chance that the same is about to happen in Maine.

On Saturday night there was an enormous sigh of relief at Romney’s Boston HQ when the news came through from the small state of Maine that their man had been declared the winner by a margin of 194 votes.

If it had gone the other way then his February tally would have been four losses out of four – three of them in states he had won in 2008 and which simply had not been anticipated.

Within a short time, though, the Maine outcome was being questioned. Voting in Washington county had been postponed because of the weather and the tally from other parts of the state was being put in doubt. In several places the official results showed a nil outcome even though the totals had been sent through and with others the wrong numbers had been recorded.

Now the state party has ordered a recount and that information should be available today. On top of that the postponed caucus in Washington county is set to take place tomorrow and you can bet that the participation level will be a lot higher than if it had been last weekend.

So there must be a reasonable chance that Maine will go to Ron Paul. Romney will look a lot less invincible than he did after Florida and he could go into the final elections of February have gone through the month with four defeats.