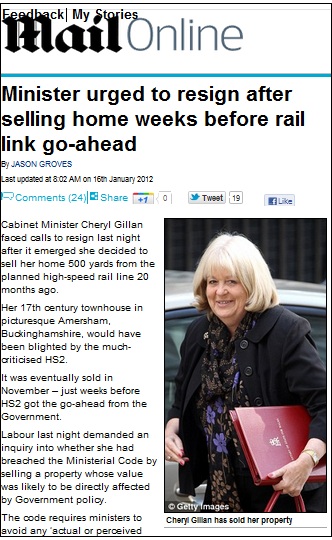 Why’s the Welsh Secretary still there?

I guess I’m like many PBers who got on Cheryl Gillan in the next cabinet exit betting market following Henry G Manson’s piece on PB in November. In it he highlighted of the commitments she had made both before and after the general election. She was then 8/1 but that moved very sharply to 7/4.

It seemed a no brainer. Alas even though the route does go through the heart of her seat she’s apparently staying put.

Today comes news from in Daily Mail that Ms Gillan, a few weeks before the announcement, sold her picturesque house in Amersham which is 500 yards from the route.

The Cabinet Minister told the Bucks Free Press in June:

There’s a clamour for her to resign. Should she go?