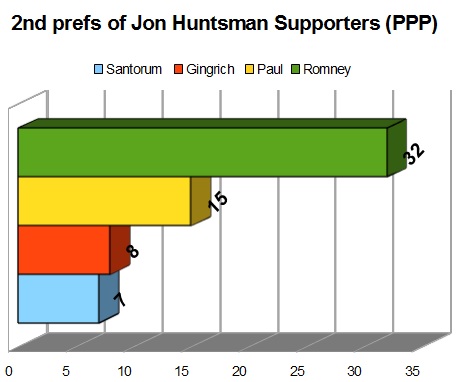 Based on data from Nate Silver’s 538 blogs/NYT

Will the race be down to three by Saturday?

The big news overnight in the race for the GOP nomination to fight Barack Obama is that John Huntsman is withdrawing. The news was hardly a surprise given he’s said all along that his continuation in the race depended on his showing in New Hampshire last Tuesday.

In the end he came third in the state on just under 17% and the surprise was that he didn’t withdraw immediately afterwards. He now says that he’ll endorse Romney.

The chart above is based on data from Nate Silver’s excellent 538 blog and shows the composite of the second preferences of Huntsman voters polled by PPP since the end of November. Clearly the main beneficiary of Huntsman’s going will be his fellow Mormon, Romney, though given his latest polling numbers that won’t add up to very much.

The race is now effectively down to three with the third slot still undecided: Romney, of course, Ron Paul who came third in Iowa and second in New Hampshire, and one of Gingrich/Perry/Santorum.

Currently Gingrich is doing much the best of the three in South Carolina polls with an RCP average of 22% compared with Santorum’s 14.3% and Perry’s 5.7%. That might change following the decision by a leading group of evangelical leaders at the weekend to give their support to Santorum.

Also the former senator from Pennsylvania might get something of a boost if the Iowa recount gives the state to him rather than Romney.

It’s worth noting that the winner of the South Carolina Republican primary has ALWAYS in recent times gone on to secure the nomination. By Saturday, surely, the race will effectively be over if it’s not already?