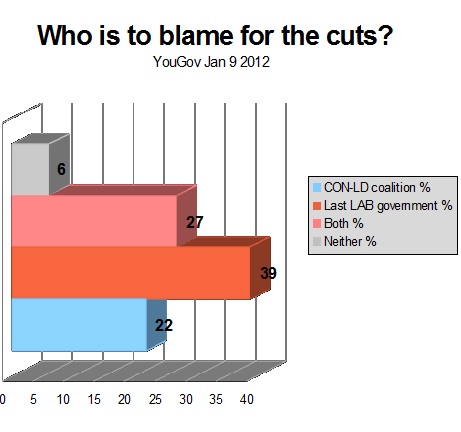 Nearly two years on and LAB still being blamed

Apart from the HS2 decision the big UK political news today has been Ed Miliband’s big speech on the economy and how a future LAB government would operate.

A particular point was his promise that in order to win in 2015 “Labour would be “a different party from the one we were in the past”. He also said they were ready to take on “vested interests” and “deliver fairness”.

All fine words but will it tackle what I believe is LAB’s biggest challenge – dealing with the perceptions of how it ran the economy when it was in government.

Today coincided with the publication of YouGov’s latest “blame game” data. Here the firm asks in the same form that it has been doing since 2010 “And who do you think is most to blame for the current spending cuts?”

I like standardised findings like this because you can look back over the record and see trends. All the YouFov findings on this since the general election can be found on page 18 of this PDF.

My view remains – unless LAB can close this gap then it will struggle to achieve a majority.