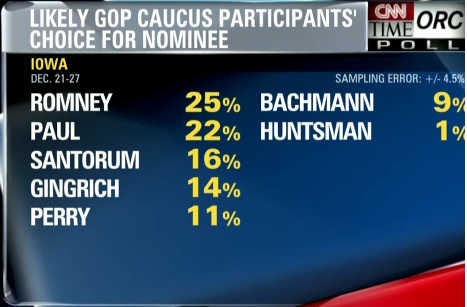 Is he now in with a shout in Iowa?

With just five campaigning days to go before Tuesday’s Iowa caucuses there’s been huge movement in a CNN/Time poll in the state. These are the shares with changes on the last similar poll three weeks ago:

The survey came out only a few hours after US political analyst, Nate Silver, suggested that we could see a late surge if conservative and evangelical voters moved behind one contender:-

“There are extremely strong incentives for supporters of Mrs. Bachmann, Mr. Santorum and Mr. Perry to behave tactically, throwing their weight behind whichever one appears to have the best chance of finishing in the top two. What that means is that if any of these candidates appear to have any momentum at all during the final week of the campaign, their support could grow quite quickly as other voters jump on the bandwagon.

This is also a case in which the polling may actually influence voter behavior. In particular, if one of these candidates does well in the highly influential Des Moines Register poll that should be published on New Yearâ€™s Eve or thereabouts, that candidate might be a pretty good bet to overperform polling as voters use that as a cue on caucus night to determine which one is most viable…”

That Des Moines Register poll is due to be published at 7pm local time on New Year’s eve.

For punters the Santorum surge provides great profit opportunities. We’ve seen it so often in the GOP race – a candidate suddenly moves into the ABM (Anybody but Mitt) slot and betting prices tighten sharply. The art, which worked brilliantly for me with the last ABM contender, Gingrich, is to get on at a long price and get out at a big profit when it has shortened.

Within minutes of the CNN/Time poll coming out last night I got Santorum at 40/1 with Betfair to win Iowa and 50/1 to win the nomination.