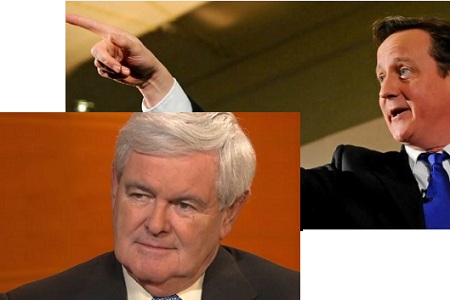 On both sides of the Atlantic there’s been a glut of polls as media owners and pollsters get their latest findings published ahead of the holiday period.

And the message in each country seems to be similar – that which looked very positive for Newt Gingrich and David Cameron only a few days ago now looks much less certain.

Tucked away on page 14 of the printed edition of the Times, and not released to online subscribers until late morning, is the first telephone survey since the weekend’s ICM poll that had a CON 6% lead. This had with changes on last month – CON 35%(+2): LAB 39%(-2): LD 12%(-1)

Meanwhile in the US an ABC/Washington Post poll on the GOP race had Gingrich 30%: Romney 30%: Paul 15%: Bachmann 7%: Perry 6%: Santorum 4%: Huntsman 2%. This was very significant because Romney is not only at the same level as Newt but he’s also broken through the 25% ceiling.

Last night a CNN/Opinion Research poll had Newt’s lead over Mitt disappearing as well. Both are on 28% while Ron Paul is at 14%.

All this suggests that the heavy negative advertising on behalf of Romney and others is starting to undermine Gingrich.

Given that the Iowa caucuses are two weeks today all this could be critical. Because the state has caucuses and not a proper primary it is very difficult to call. The only participants in the primary process are those ready to brave the freezing cold and attend a local meeting on a Tuesday evening.