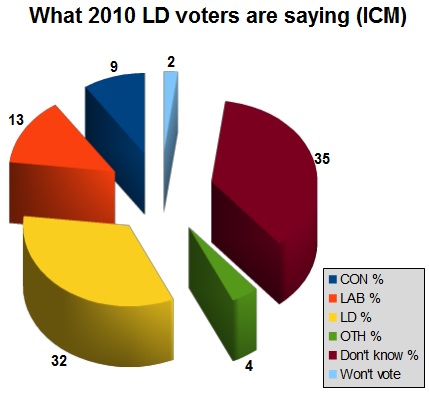 The big polling story about the Lib Dems since the general election has been a big decline in its vote and a largish movement to LAB.

Often the figures we see on this are exaggerated because the don’t knows are netted off. To really see what’s happening we need to look at all the responses as seen in the chart above from the latest Sunday Telegraph survey.

As can be seen Clegg’s party is retaining just 32% of its 2010 general election voters but the biggest slab of them, 35%, are now saying they “don’t know” when asked the voting intention question.

But look at that LAB share – just 13% which is very different from what we are used to.

This suggests that three times as many 2010 Lib Dem general election voters are now saying don’t know rather than they’ll vote Labour.

I have not had time to do a proper analysis yet going through all ICM polls but I think that the 13% LAB and the 35% DK are the lowest and highest respectively.

What ICM does with its headline voting shares is to take half the don’t knows for each party and allocate them, turnout weighted, to the overall total. This has made ICM more accurate when compared against real results whenever we’ve been able to examine it.

All this seems to suggest that a big factor behind the big switching that’s seen the LAB decline with ICM has been a move by 2010 LD supporters from the red camp do don’t know.