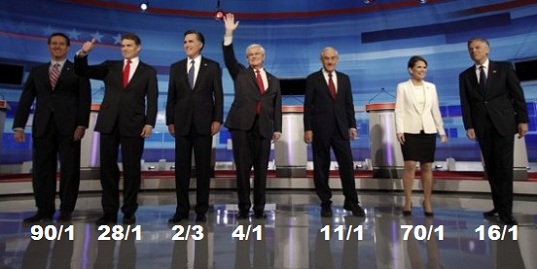 Will the odds on any of the outsiders move in?

Whenever we discuss the fight for the Republican nomination we always seem to end up talking in absolute terms – who is best to fight Obama, who’s going to win, who has not got a chance, etc. That’s fine.

But for serious gamblers with an eye to making money the question of who finally gets chosen in August is currently not that relevant. What we are interested in are the short to medium term price movements that provide profit opportunities.

What you aim for is to spot and back a contender at long odds and then get out of your position if/when the price moves in. You do this by placing lay bets on Betfair or other betting exchange.

To give an example – at the start of November I began backing Newt Gingrich at 23/2 and continued to put money on as his price tightened. By last Tuesday he’d moved in to 1.3/1 and I closed almost my entire position down. He’s now out to 4/1 and I’m considering going in again.

The result is that I’ve been able to withdraw all the money I had invested in the market and have very nice betting positions on every single contender.

This means that I’m a winner whatever happens with the added joy that from now on all my betting on the GOP race is for free.

At the moment I’m pondering over the two rank outsiders – Rick Santorum and Michelle Bachmann. Both are relying enormously on good performances in the Iowa caucuses a fortnight tomorrow and given the many imponderables of these particular elections one of them could just possibly do that.

Bachmann has been particularly impressive in the past few days. She’s the one who’s been taking the fight to Mitt Romney, Newt Gingrich and now Ron Paul and she was also born in the state. Could she be a mover in the betting? It’s worth risking a little bit of the profits I’ve already made by betting at 70/1.

I notice that StJohn, a leading PB gambler, announced on the overnight thread that he’d been taking the long odds against Santorum. I’m on him at more than 100/1.