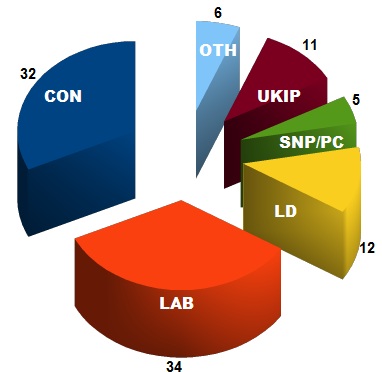 But is this down to the methodology change?

In what is only its second national voting intention survey Survation, for the Daily Star Sunday, is reporting a share for UKIP which is markedly higher than the other pollsters. Unlike its first poll this one was carried out online.

In its first poll earlier in the month Survation used the telephone and found just 4% saying they would vote UKIP – so a massive difference between that and these latest numbers.

As can be seen from the chart a total of 22% of support went to parties which are traditionally categorised as others. That’s an extraordinarily high percentage.

I have discussed the methodology with the firm which has promised a blog post explaining how it was carried out. I will postpone my comment on that until after the explanation is published.

Whatever this is a real boost for the anti-EU party and comes at a difficult time for all three of the main parties on the issue.

The pollster has now explained the methodology that was used. The key point was this:-

“In this new survey we listed all parties in the the order of votes received in the 2010 General Election while randomising the top FOUR parties to the survey taker to avoid a common pitfall of online surveys â€“ eg clicking the top answer.”

This meant that UKIP was given a much higher level of prompt than in any other poll which almost certainly explains some of the difference between its phone poll share of 4% and the the latest survey’s 11%. The firm says that the conventional approach “biases the poll in favour of those three prompted parties to the detriment (or not) of the â€œothersâ€.

YouGov’s Anthony Wells, has put up a post on UKPR arguing that the conventional approach is not producing inaccurate shares for minor parties when tested against real elections.

YouGov has been down this prompting road before. In the Holyrood elections in 2007 the firm’s conventional prompt was changed half way through the campaign to include minor parties. This boosted support for â€œothersâ€ from 11% to 19%, and saw the Scottish Greens going from 4% to 9% in the final poll. The party ended up getting 4%.

What we need is a means of testing the potential for minor parties in a manner that works. There has been some interesting work recently on this which I’ll cover in the next post.