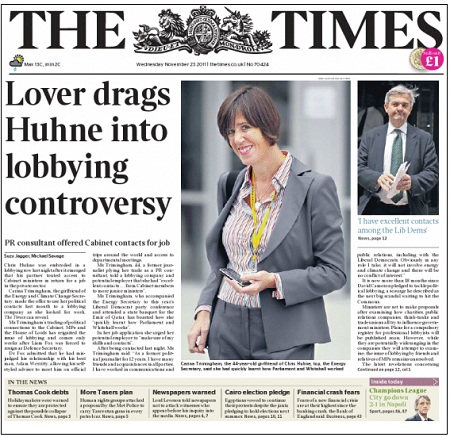 What’ll this do to Huhne’s position?

I always love it when a PB post sets off a big gamble. Before yesterday’s well researched piece by Henry G Manson suggesting that we put our money on the HS2-protesting Cheryl Gillen you could have got 8/1 against the Welsh Secretary being the next cabinet exit. Within a few hours that was in to 3/1 where, arguably, it still offers good value.

The main obvious other possibility is, of course, LD energy secretary, Chris Huhne, who’s having a “spot of bother” over claims that his estranged wife, Vicky, “picked up some speeding points for him” eight years ago. According to reports overnight a decision on that could be imminent.

Today the spotlight turns on Ms Trimingham – the woman whom Huhne left his wife for in the early days of the coalition in 2010.

The Times front page splashes a story about the partner of who, is is said, she boasted of her links to Cabinet ministers. According to the paper behind the paywall, Ms Trimingham told a lobbying firm that she had “excellent contacts… from Cabinet members to more junior ministers”. In her job application, she was said to have urged her potential employer to “make use of my skills and contacts”.

There is nothing in the report to say that this went beyond that and a spokesman for Huhne said: “There is no question of a conflict of interest as Chris Huhne understands Carina Trimingham does not intend to accept any work that touches on his departmental responsibilities.”

It’s hard to see how this makes Huhne’s position any more precarious than it already is. If the DPP acts and Huhne resigns before Gillen then yesterday’s backers will be losers. If he doesn’t then those bets could be winners.