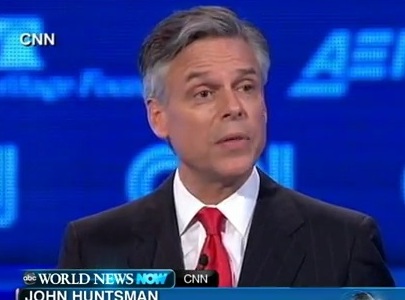 Back in November 2008, only a week and a half after Obama won the White House race, I placed a bet of Â£50 with Ladbrokes at 200/1 that ex-governor of Utah, Jon Huntsman, would be the next president.

I abandoned hope for the bet a few months latest when Huntsman, who is also a former diplomat, accepted an offer by Obama to be the US ambassador to China. He served in Beijing until April this year when he resigned his post so he could enter the 2012 presidential race.

Since then he’s struggled only registering one or two points in most polls. His appeal to the core GOP base is not helped by declarations that he believes in evolution and, worst of all, that he “trust the scientists” on global warming.

Last night in the CNN-organised GOP contender debate Huntsman gave his best performance so far with a number of pundits saying that he came out best. This has been seen in the betting where he’s now third favourite with both Betfair and Intrade.

Huntsman might have registered with gamblers but what about the wider GOP audience who will start making their choices in the first primaries only a few weeks away?

His big gamble has been to throw virtually his entire campaign effort into New Hampshire which is the first state to have a proper primary election as opposed to a caucus. The contest there is also interesting because it is not confined to registered Republicans.

Four years ago John McCain’s eventually successful campaign for the nomination got a huge boost when he beat off Romney in the state. Huntsman is doing much better in state polls there than in the national ones and who knows?